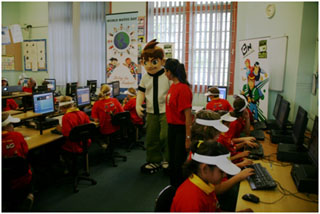 Not only were students competing on computers, the Launch also saw the introduction of the new World Maths Day Application for the iPod touch (this follows the recently released Live Mathletics Application for the iPod). World Maths Day has now gone mobile, students no longer have to be on a computer to connect with other students around the world. The four Australian ambassadors were later presented with their official ambassador iPods, a privilege which extends to all ambassadors.

The day saw its fair share of drama, Australian ambassador and 2008 World Maths Day champion Tatiana D was on a flight to Sydney that experienced difficulties and had to return to her home city of Melbourne.

Total registrations for World Maths Day are now well over  the million mark, currently at 1,031,083. This includes 28,501 schools from a total of 231 countries.

The most active countries on the website are the United Kingdom and the United States of America with 323,024 and 287,095 registrations respectively. Yesterday afternoon the US was in place to overtake the UK for most registrations, however a surge of registrations overnight has seen the UK pull ahead again.

Will a champion emerge from one of these countries?

Click here to see news coverage of the Launch