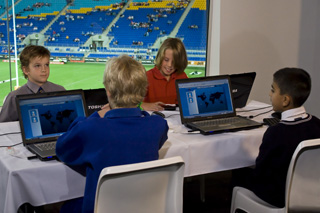 Sport and Maths combined on Monday 8th June at Skilled Park on the Gold Coast, Australia. The result was an exciting conclusion to the Gold Coast Titans Mathletics Challenge in what was a pressure cooker environment. With a magnificent view of the Titans home stadium in the background, 8 students representing Primary and Secondary Australian schools played in two deciding 60 second races of Live Mathletics.

Thanks to a lot of hard work and effort, 8 students were flown to the Gold Coast for the Challenge Grand Final, to be held before the St George Illawarra Dragons v Jetstar Gold Coast Titans Rugby League game. The top 8 finalists are listed below. 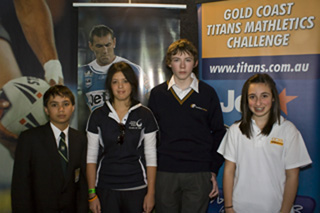 These students can be very proud of the way they conducted themselves and should be congratulated on making the trip (in some cases from the other side of Australia) to the Gold Coast for what would be a nerve-racking final. Special thanks also go to the Gold Coast Titans, who helped initiate and support this Challenge and looked after the finalists who travelled to the Gold Coast. Mathletes will notice that a Titans jersey, Titans cap and Skilled Park background are all available in Facemaker.

Any cookies that may not be particularly necessary for the website to function and is used specifically to collect user personal data via analytics, ads, other embedded contents are termed as non-necessary cookies. It is mandatory to procure user consent prior to running these cookies on your website.